A lot of people ask where I came up with the name Pigeon.

At its core, Pigeon was created to help parents locate their kids.  That’s who we are and that’s where we’re headed. That defines us and drives us.

We wanted to have something simple, iconic, fun and sort of playful that we could be proud of.

We started off as WeeGuardians – which I thought was pretty cool but, others thought it was a bit too defensive.  I even went so far as to generate a bunch of logos to go along with it:

Yeeeaaahhhhh. Like a lot of entrepreneurs, I spent too much time on this logo. Really.

Eventually, after two of your advisors tell you that you need to change your name, you sit back and re-think things.

Returning to what we’re all about: location.  When I sat down, I knew I had tie to in  location in some way, and what came to mind was the homing Pigeon. 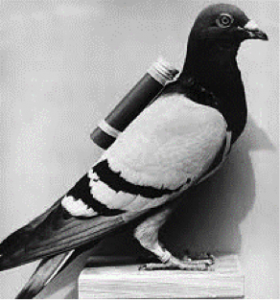 Did you know that flights as long as 1,100 miles have been recorded for homing Pigeons?  Or that that they were once used to proclaim the winner of the Olympics? Or that messenger Pigeons were used as early as 1150 in Bagdad and later by Genghis Kahn?

They have an innate sense of direction to help them get home. This is at the heart of what we’re building at the Pigeon Network.

Pigeons have been used for millenia to deliver messages and now we’re using Pigeon to keep parents informed.

On the funnier side …

Pigeons are harmless and cute. So are kids. Pigeons leave a mess wherever they go and are always under foot. So are kids. In the end, Pigeon makes us smile, smirk, and laugh while fulfilling a meaningful mission of making sure kids always get back to home.